° Derrick Rose: definitely not coming back today, and maybe not ever. Good news if you were idling on placing that 60-to-1 bet for the Bulls to win the championship.

° Nazr Mohammed claims to have a “master plan.” (Does it involve getting dunked on?)

° Joakim Noah isn’t starting Game 1, nor does he sound like someone who’ll factor much into this series.

° If you’re attending the game in person, make sure to get there early: Security will be a little tighter in the wake of the Boston attacks.

° Brooklyn’s playoff song is by Fall Out Boy, according to some guy.

° How Brook Lopez gets open. Highly relevant if Noah isn’t there, and if Taj Gibson is still battling injury.

Be sure to subscribe through iTunes (itunes.apple.com/us/podcast/brook…id622834343?mt=2) and leave comments/criticism if you feel compelled. Thanks for listening! 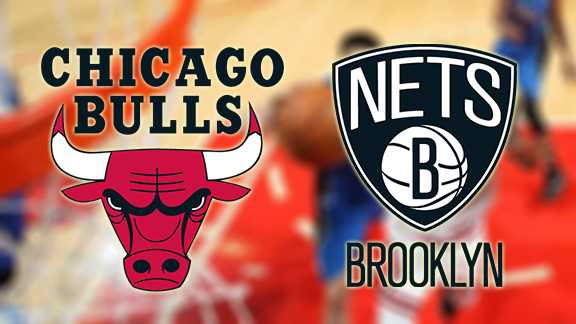 Here are our official predictions for the first round of the playoffs, where the Nets take on the Chicago Bulls in a series that’s already been denigrated as “unwatchable” around the Internet by everyone who doesn’t like watching Nate Robinson do the basketball equivalent of running into a wall. But how little they know! There’s so much to look out for and wonder about as things get underway. These are things that matter to us, and things to wonder about as Brooklyn hosts its inaugural playoff run.

END_OF_DOCUMENT_TOKEN_TO_BE_REPLACED

I respect darren rovell a lot but he is wrong about the nets not giving out tshirts for sat nights game. We are giving fans tshirts. Thanks

Plenty of you might quibble with the “respecting Darren Rovell” part, but hey, free t-shirt! (This was following all those reports of the Nets being dastardly, no-good showrunners who would’ve even give their fans the shirt off their back.) Collect your “HELLO PLAYOFFS” tee at Saturday’s Game 1 against the Chicago Bulls, should you be so lucky to attend. With a half-hearted win over the lowly Detroit Pistons, Brooklyn can finally say hello to the postseason. Were you expecting anything better? Carlesimo played his starters for the entire first quarter, allowing the Nets to jump out to an early lead—after that, Tyshawn and Mirza got tons of time. Not that it mattered much—they held a double-digit lead until the fourth quarter, when Detroit suddenly launched a furious run (including the game’s final 11 points), but still held on the season-sealing victory.

END_OF_DOCUMENT_TOKEN_TO_BE_REPLACED

Tyshawn Taylor, past and present The thing about Tyshawn Taylor is that he’s human. He’s young, maybe-a-tad-undersized at the tail end of his rookie NBA campaign, maybe a full playoffs and offseason away from meaningful playing time at the NBA level. His first year in the NBA hasn’t been anything particularly special—at times, he’s risen to the occasion and stepped up for banged-up iterations of this year’s Nets, but at other times, he’s on the bus to Springfield with fellow NBDL yo-yoer Toko Shengalia. He’s got a young family that I’m sure he wishes to see more of and a successful college career in a hoops-obsessed part of the country in his hindsight, and fading. He likes to get on Twitter and vent—he’s recommended follow if you like accounts that tweet Drake or Jay-Z in between mini meltdowns (the latter isn’t exactly a new thing). No matter if it’s good stuff or bad stuff, the past can be hard to shake when the road in front of you is long.

END_OF_DOCUMENT_TOKEN_TO_BE_REPLACED There were plenty of explanations why tonight’s game was inconsequential, only some of which have to do with basketball. Lest I over-repeat the necessarily beaten drum that this is just a sport and that there are certainly bigger and more important things under the sky to worry about than resting for the playoffs, I’ll keep it to those hoop-related reasons. The Nets were locked into the fourth seed regardless of how the rest of their final two games played out, which is why they benched all of their starters from last night and gave their victory cigars some time to burn. Tyshawn Taylor played a lot, as did Mirza Teletovic, Tornike Shengeila, and Kris Joseph. The game looked like it would be a wash in the first quarter, when the Wizards raced out to an early lead and exploited the fact that Brooklyn’s second unit isn’t great for long stretches at a time. And that was okay, because if you buy tickets to an April contest then this is what you’ve got to expect.

END_OF_DOCUMENT_TOKEN_TO_BE_REPLACED 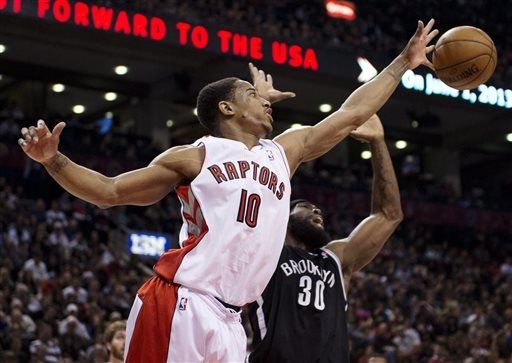 Surprisingly, there isn’t much fun to be said about a 93-87 loss in which the Nets creep perilously close at the end only to see things fall away on a pair of Joe Johnson airballs. They were straight out listless for the entire game—to borrow a phrase from Knickerblogger’s Robert Silverman, they were lacking their list—and stuck us with a drearier-than-dreary second quarter in which they didn’t hit double digits until the period’s final minutes. These are the Raptors, not the Thunder, and yet the Nets were getting blown out for most of the first half. Toronto rode a bunch of seemingly unsustainable mid-range shots to success, taking advantage of a steadily collapsing interior defense that kept on giving open looks to Aaron Gray and Rudy Gay, among others. Brooklyn got within two with four minutes left, but couldn’t push it any farther past that.

END_OF_DOCUMENT_TOKEN_TO_BE_REPLACED You, the tortured Nets fans, were ready to roll over and pass out after the Indiana Pacers managed to wipe away a 24-point deficit to take the lead in the fourth quarter’s final stretch. The Nets had bulked up their lead by shooting at unsustainable levels, but they hit a dry well as Indiana began pushing them with trademark annoyance, forcing turnovers, getting out in transition and getting enough of a rise that Reggie Evans was ejected in the third quarter for growing increasingly frustrated with how the game was being called. They even instigated a fight, sort of, when Lance Stephenson jutted his elbow out as he was being fouled by Keith Bogans in transition, leading to a little bit of a slap fight before cooler assistants prevailed. So if the Nets were going to blow this, that’s how it was going to happen: by allowing their opponent to annoy them to death, which seemed a probable outcome when Stephenson hit a go-ahead three.

END_OF_DOCUMENT_TOKEN_TO_BE_REPLACED

From “Open Letter,” which he released this morning:

“Would’ve brought the Nets to Brooklyn for free / Except I made millions off it, you fuckin’ dweeb / I still own the building, I’m still keeping my seat / Y’all buy that bullshit, you’d better keep your receipt”

For the record, we support Jay-Z doing whatever he wants to do. (Though, to be technical, he only owns a small percentage of Barclays.) Listen to the track below.