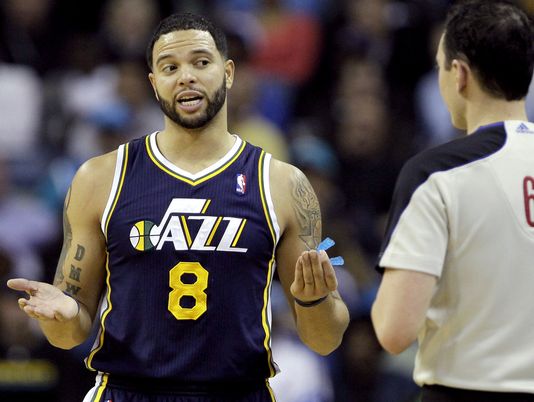 Okay, now that’s out the way, let’s move on. Deron Williams returned to Utah for the second time since the infamous trade that made him a Net, and for the second time the Nets left with a loss. D-Will performed much better than last seasons 3-15, five turnover performance, but the outcome was the same. Williams was booed with every touch of the basketball, despite being semi-cheered during pre-game introductions.

On the whole, this was a game of runs. The Nets and Jazz went back and forth the entire first half, with the Nets hanging onto an unconvincing two point win heading into halftime. Then, Randy Foye happened. I don’t know if any of you saw the incredible Trey Burke performance in last night’s Kansas-Michigan game, but what Foye did was almost a carbon copy of what happened in Arlington. Foye hit three-pointer after three-pointer in ridiculous fashion, finishing with 26 points on 9-11 shooting (8-9 from behind the arc). The Nets simply didn’t have a chance against the hot hand.

On the Brooklyn side, Williams put up a solid game, scoring 21 points with 11 assists. Brook Lopez added 27 points and seven boards and Reggie Evans grabbed his usually-absurd 16 boards. The second half of the game was the story as hot shooting and poor defensive play from the Nets gave the Jazz the W.

At least this was fun

In the newest podcast, Chris talks with Spencer Hall (@saltcityhoops) from TrueHoop’s Salt City Hoops about tonight’s Nets-Jazz game, the return of Deron Williams, the development of Derrick Favors and more. It seemed like a bit of an anomaly that the Nets were hanging with the Nuggets after one quarter, considering how each team was scoring. The Nuggets were getting dependably clean looks inside off their focused pick and roll game, which the Nets remain crummy at stopping, and their transition offense was similarly unstoppable. Brooklyn, on the other hand, was isolating far more and falling back on familiar spots: Bogans in the corner, Deron posting up, Brook working in the paint. But they were within three points, at least until their shots stopped falling and Denver cracked things open by running the hell out of the ball, taking full advantage of Brooklyn’s 21 turnovers and a balanced attack that saw six players in double digits, three off the bench. The Nets were down by 18 at the half and didn’t get closer than 12 after that—the only note I took during the fourth quarter, when things were going really bad, was “Screw this.”

END_OF_DOCUMENT_TOKEN_TO_BE_REPLACED

‘Joe Johnson’ reflects on his life as a police reporter

Away from Washington, Andray Blatche & JaVale McGee reinvent themselves For those of us lucky enough to have the option of mobility, there’s a moment when you realize you need a change of scenery: a new job, a new city, a new social circle. The rhythms of your everyday life are too convenient, the interactions too typical—nothing has changed and it seems unlikely that they will, so perhaps it’s just better to move on and try somewhere new.

I’m thinking about this adult phenomenon as the Nets head to Denver tomorrow night, where two former Washington castaways—Andray Blatche and JaVale McGee—will play against each other in a radically new context (not for the first time, I should note). A year ago, they were both underachieving Wizards prone to goofing off, inconsistent play and the occasional fistfight, poster children for the perils of throwing young talent together and expecting things to automatically jell. Now, they’re indispensable bench elements of two playoff teams: McGee the game-changing transition weapon there for the block or alley oop, Blatche the instant offense capable of remapping shot charts with his unconventional but somehow effective shooting selection. Statistically, both players are having their best years ever, with career-high player efficiency ratings and improved numbers across the board. More importantly, they’ve been decoupled from the expectation of being a franchise player. No longer are they judged against the idea of what they might be, but against what they’re capable of right now—which, as it turns out, is plenty.

END_OF_DOCUMENT_TOKEN_TO_BE_REPLACED

The artier side of the Nets

“The idea of putting art somewhere that isn’t a museum is interesting to me, because people don’t know what they are going to get, and they can start to see something in a new way. That’s why I like putting art in this place, because people don’t come here for the art. In the first year alone, this building will have 2.6 million people come through it. It’s just the idea of exposing people to this art. It’s amazing when you think about how much power we have.” —  David Berliner, Barclays Center executive director, in an interview with Complex about the art hanging at Barclays The gist of it: There was an amusing little wrinkle at the beginning of the game, which was originally scheduled for 10:30 EST but became noticeably delayed the longer Chicago-Miami took to conclude, with the revised tipoff announced for 10:45. That doesn’t happen often, where one nationally televised game is specifically held back; usually, they just run concurrently. But every basketball fan in the country was tuning in to see if the Bulls would break the Heat’s streak, which of course they did—and because that contest ended in such dramatic, blood-curdling fashion, a follow-up game like Nets-Blazers was a hell of a way to come down. A full body bath where you just hang out for a few hours; an Ambien you take and knock off for the rest of your day; a petting zoo where you get to hang out with a baby goat for as long as you want.

END_OF_DOCUMENT_TOKEN_TO_BE_REPLACED

In the newest episode of the Brooklyn’s Finest podcast, Chris and Jeremy are joined by TrueHoop’s Portland Roundball Society‘s Danny Nowell (@dmnowell) to talk about tonight’s game against the Blazers, along with meditations on the Gerald Wallace trade that led to Portland drafting probable Rookie of the Year Damian Lillard and why Brooklyn’s been a little lucky with their injuries this season.

In a videogame, alas. Here’s Joe Johnson talking about his apparently dominant digital franchise and the experience of modeling his avatar for the upcoming installment of the NBA 2K franchise, which he seems quite stoked to talk about.

They’ll happen on August 25, which, hey, the day before my birthday! Shame this isn’t the Movie Awards so Brook Lopez could present the “Best Superhero” honor. Maybe Deron can hand out “Best Choreography”?