Hawks 105, Nets 93: The downside of expectation The gist of it: As LMFAO might’ve sung, sorry for foot-in-mouthing. I and many other Nets fans were excited to see the team pull even with the Knicks in the Atlantic Division lead, which would’ve happened last night were they able to beat the Atlanta Hawks, whom they’d blown out just a week before. A four day layoff should’ve enabled that, right? Alas, it wasn’t meant to happen: After three basically even quarters, two of which I denoted with “summary: sloppy, turnover-prone, unfocused,” the Hawks broke things open in the final period. It wasn’t pretty, either: They kept on scoring in transition, drawing fouls on scores, and eventually turned an either-or contest into a blowout of their own. It wasn’t much fun to watch, and even worse, the Knicks are still in first place.

END_OF_DOCUMENT_TOKEN_TO_BE_REPLACED

A few things from the weekend before we head into tonight’s game against Atlanta:

END_OF_DOCUMENT_TOKEN_TO_BE_REPLACED

Are the Nets the best basketball team in New York? Uh, yeah.

Sure, I’ll go ahead and say it: they are for the moment, at least until the Knicks prove they’ve dealt with their injury woes. Three of their should-be starters missed last night’s game, and the most fans can be happy about is that Carmelo Anthony’s knee just needed to be drained rather than replaced. (They’re 1-3 since Amar’e was ruled indefinitely out, and those losses were bad losses.) The Nets, on the other hand, are 22-12 since the beginning of the 2013 and continue slicing the deficit for the division lead: They’re just one game back, and could tie things up on Sunday.

Sports Illustrated’s Ben Eagle chalks Brooklyn’s resurgence up to the revitalized Deron Williams, who’s averaging 23.3 post-break points per game on a .467/.471/.852 shooting line. Beyond Basketball Reference, the eye test reveals a healthier, zippier dude who’s once again using his speed to create opportunities that were eluding him at the beginning of the season, rather than forcing things—and when your primary ball-handler’s mind and body are right, everything else falls into place. Not to count our chickens—or division titles, for that matter—but it’s hard to ignore where the balance of power is slowly shifting. Come at me, Knicks fans. (But please, don’t bring this up in a week if Carmelo and Tyson Chandler return stronger than ever and Deron Williams falls down a metaphorical well.)

Expect a pair of returns from Johnson & Humphries

First off: Joe Johnson announced he’ll “definitely” play on Sunday, which is nice to hear. The team was more offensively efficient when he was off the court on Tuesday, but whole “playing against a bottom 5 defense” thing makes expecting the same come with some extreme caveats. As Buddy Grizzard broke down yesterday, Johnson has been great in crunch time this season—something the Nets will need as they make this final seeding push.

END_OF_DOCUMENT_TOKEN_TO_BE_REPLACED

Another Side of Joe Johnson It wouldn’t be very chivalrous for Nets fans to cheer the unlucky ailments confronting the New York Knicks in recent weeks, but there’s undeniable opportunity for Brooklyn to vault past their inter-borough rivals to the top of the Atlantic Division—thereby giving them a top three seed, and a far easier path to the conference finals. (Where they’d likely have to play the currently unstoppable Miami Heat, but hey, conference finals!) As Nets fans have enjoyed the rejuvenating effect of a German blood doctor on Deron Williams’ legs, the Knicks faithful have lamented the variety of debilitating injuries to hit their players: ambiguous ones to Carmelo Anthony, terrifying ones to Tyson Chandler, and recurring ones with Amar’e Stoudemire. Stoudemire, in particular, seems the most worrisome: Apart from the fact that the wear and tear on his knees can’t be easily solved, there’s the uncomfortable fact that his financially gracious contract is on the books for another couple of seasons—money that begins to look especially onerous the longer he’s off the court. END_OF_DOCUMENT_TOKEN_TO_BE_REPLACED The gist of it: A night after a disappointing loss to Philadelphia, the Nets rebounded to dispatch the New Orleans Hornets and crawl back within two games of the Atlantic Division’s top spot. With Amar’e Stoudemire out indefinitely and Carmelo Anthony battling a jelly-filled leg, wins like these against bottom squads—in which the Nets play to their full offensive potential—are deeply important.

° I suppose it’s fun when teams play each other at a high level of efficiency and entertainment, but if it were up to me then every matchup between Brook and Robin Lopez would be boiled down to a brotherly one-on-one; no one else on the court but the two bros, backing each other down in the post, giving each other affectionately aggressive noogies following a dunk or a tough shot, upping the passive aggressive smack talk that would ultimately culminate in one of them screaming at the other, “DAD ALWAYS LIKED YOU MORE!” Really, what’s cooler than twins?

END_OF_DOCUMENT_TOKEN_TO_BE_REPLACED

Johnson on Lopez: “He doesn’t really have a weakness.”

From the Huffington Post, of all places, is a short profile of Brook Lopez featuring a few verbal daps from Joe Johnson. ”He has a great, soft touch in the paint,” Johnson says. “He probably has the softest touch of centers in the league. He really doesn’t have a weakness.” Also: ”He’s been so poised. He’s very relaxed in the post. He’s never in a rush and that’s one thing that I love about him. And he’s a great pick-and-pop guy.” We spend a lot of time reading the media’s opinions re: just about every player there is, but it’s nice to get the inside perspective from a teammate. (Offensively, at least; Johnson might defer if asked about defense.) 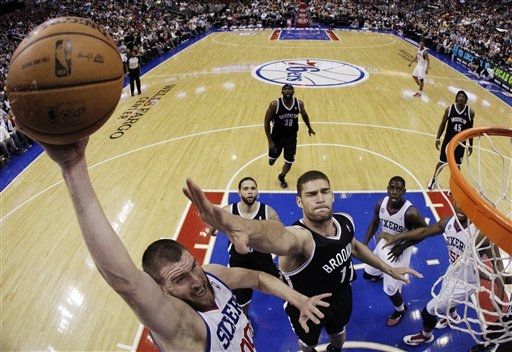 Pardon Hoop76′s Tom Sunnergren’s cynicism when, before tonight’s game against the Philadelphia 76ers, he appraised his team’s abilities by bluntly stating: “First, and most significantly, this is a really bad basketball team.” At the time, that certainly seemed true: The 76ers had won just 2 of their last 15 games and were riding a five-game losing streak, while the Nets had taken three in a row to get a little wiggle room in the Eastern Conference’s four spot. But consistency has been their enemy all season long and the Nets looked lifeless after a hot start, allowing all five 76ers starters to score in double digits while enabling Spencer Hawes to nearly throw up a triple-double on 66% shooting. Spencer Hawes!