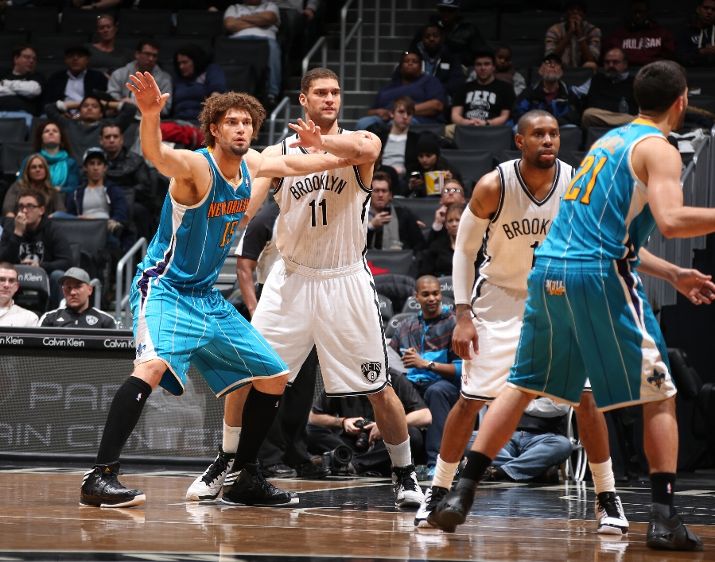 The gist of it: A night after a disappointing loss to Philadelphia, the Nets rebounded to dispatch the New Orleans Hornets and crawl back within two games of the Atlantic Division’s top spot. With Amar’e Stoudemire out indefinitely and Carmelo Anthony battling a jelly-filled leg, wins like these against bottom squads—in which the Nets play to their full offensive potential—are deeply important.

° I suppose it’s fun when teams play each other at a high level of efficiency and entertainment, but if it were up to me then every matchup between Brook and Robin Lopez would be boiled down to a brotherly one-on-one; no one else on the court but the two bros, backing each other down in the post, giving each other affectionately aggressive noogies following a dunk or a tough shot, upping the passive aggressive smack talk that would ultimately culminate in one of them screaming at the other, “DAD ALWAYS LIKED YOU MORE!” Really, what’s cooler than twins?

Brook definitely got the best of his brother last night: Apart from the 10-of-15 shooting performance, there was that dunk—the one that came laden with so many implications and dramatic overtones. Gosh, it was nice—and pretty to watch, too, with Brook’s arm a loping, extended pulley of a thing, led along by inevitability more than force. Here it is, forever:

° Small sample size, of course, but according to Synergy the Nets run an isolation play 13.6% of the time—and within this, Joe Johnson does this more than a quarter of the time. With Johnson out, this number dropped to 8.8%—and Deron Williams’s assist rate leapt up to 50.8% past his season average of 37.1%. Again, small sample size, but it was night and day to watch how Johnson’s absence seemed to free up the team’s ball movement.

° Shout out to MarShon Brooks, who hit double figures for the first time since February 1. Him and Blatche are two of the league’s premier wise guys—their style of play is so anathema to the modern push toward analytic efficiency, as it seems to have been crafted playground-style one neighborhood stiff at a time. When those reverse layups, floaters, stutter-step jumpers and long twos are falling, though, the Nets are awful hard to stop.

° P.J. Carlesimo finally made good on his promise to play Blatche and Lopez at the same time, which hadn’t happened over the last few games. Again, small sample size, but the Williams-Watson-Wallace-Blatche-Lopez lineup was a +9 in 7 minutes—most of which came toward the end of the fourth quarter, when the Nets pulled away for good. Would be nice to see some more of this for further evidence.

° Call him Brook Nowitzki: Lopez was displaying stupid kinds of range the entire night, hitting high-angled bank shots and 18-foot fadeaways like it wasn’t anything. He remembered he was bigger and stronger than everyone else on the court, too, often muscling his way inside. In one particularly nice moment, he and Williams kept on kicking it in and out to each other—three times in all—until he found the proper post position for an easy score. Finishing with just 5 rebounds is the dark side of that, but oh well.

° Gerald Wallace is 0-for-10 from three point range in his last five games, which is a problem as the Nets like to find him on the wing and in the corner when the defense wanders. He got one wide-open look in the third quarter—and clanged it hard. Though he’s never been a great long range shooter, anything’s better than 0%.

Why not watch this again? Full disclosure: I might’ve blacked out a little after this happened, which means I missed the “That’s a man jam!” call which would’ve normally raised an eyebrow. (I’m typing this from the floor, where I’ve laid all night.) Say what you will about meaningful dunks, but the brotherly element to this is something ripped out of Hamlet—which, taken to its logical conclusion, means Robin is due to poison his brother and marry his wife. (Eep!)