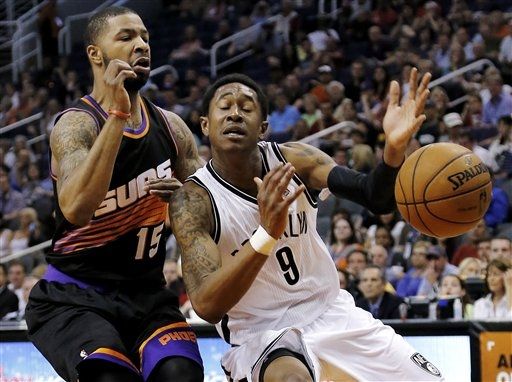 The gist of it: It’s easy to switch away from the NBA during March Madness’s especially exciting peaks, even more so when one playoff team stuffs a double-digit cushion against the worst of one conference. There’s more life found in Florida Gulf Coast University’s unlikely sprint to the Sweet Sixteen than in a million 2012-13 Phoenix Suns games, and you expect the Nets to hold onto such leads when one team is giving real, meaningful minutes to Wes Johnson.

END_OF_DOCUMENT_TOKEN_TO_BE_REPLACED The gist of it: Apologies for how late this recap is coming. The game ended at like 1:30 AM local time and I was conscripted into a never-ending Google Hangout with the fellows from ClipperBlog, who did a very nice job asking me questions I was only sort of prepared to answer. (My favorite response: “I don’t know, man. What do you think about Lamar Odom?” Which meant waking up fairly late this morning and lounging about in a Sunday stupor until pulling it together to bring you the tale of how the Nets… almost pulled off a big win against a great team, and why that should be a little bit exciting.

END_OF_DOCUMENT_TOKEN_TO_BE_REPLACED

“I’ve yet to be dunked on really like bad. You just have to know your limitations, know who is there. In [Brandon Knight’s] situation, there is no winning that. You can’t take a charge. Certain situations you can’t control. … [Knight] tried. But what are you gonna do? You’re just gonna give an and-one.” — Deron Williams, talking about playing the Clippers. Better to lose face one way than the other, I suppose.

In another episode of the Brooklyn’s Finest podcast, Chris talks to Kirk Henderson (@KirkSeriousFace) from ESPN TrueHoop’s The Two Man Game. Listen to the two discuss last night’s Nets/Mavs game, Deron Williams’ non-decision to sign with his hometown Mavs, March Madness, and more.

Be sure to subscribe to the show through iTunes and leave comments/criticism if you feel compelled. Thanks for listening! The gist of it: The Nets could’ve fallen down on this one: They’ve been up and down against good teams and should-be good teams, and though Dallas isn’t having the best go of it this year they’ve still got loads of talent and a fading chance to make the playoffs. But after trading shots in the first half, the Nets broke away in the third quarter—a rarity for them—and turned this thing into a blowout, paced by an unstoppable Brook Lopez (38 points on 22 shots) and a vengeful Deron Williams (31 points, playing against a team he almost signed with last summer). Dallas’s soggy defense allowed the Nets to score in a multitude of ways, and what was tense became not that big of a deal by game’s end. They’re now 2-0 on this circus trip and only two wins away from the franchise road record of 20, a number that seems… dark in context of how long they’ve been around in the NBA. It happens, I guess.

END_OF_DOCUMENT_TOKEN_TO_BE_REPLACED

— Brook Lopez, on being told his brother-on-brother dunk “blew up the Internet” in this Q&A with Dime. Once more, with pleasure.

How much does property across the street from the Barclays Center sell for?

A lot, even if it’s in desperate need of renovation. From the New York Times: “At the end of February, that little yellow clapboard house at 474 Dean Street was put up for sale, listed for $1.495 million. And despite a domineering neighbor — or perhaps because of it — the owners of that house received an offer, which they planned to accept, after less than two weeks.” That’s a lot of Nathan’s dogs! The gist of it: There are worse ways to begin a two-week road trip, even if everyone was justified in switching over to Miami-Boston around the middle of the second quarter when it became clear that the Nets had a blowout in the making and that Detroit wasn’t really doing much to challenge that. A 37-point victory, their second largest of the season, comes when one team is making everything and the other isn’t making anything—the fun of which comes upon witnessing all those makes go down with any trouble or dramatic impact. You’ve played those games of videogame basketball where you’re winning by a lot and stop running plays, instead choosing to take a bunch of contested threes and drives in traffic, right? And then you keep scoring anyways even though you’re not trying to? Yeah, it was a little like that. One city down, seven to go.

END_OF_DOCUMENT_TOKEN_TO_BE_REPLACED

Welcome to the debut of the Brooklyn’s Finest podcast—the one and only show completely devoted to Nets basketball. In the first episode, our host Chris Hooker talks to Brooklyn’s Finest founder Jeremy Gordon about the newest addition to the TrueHoop Network, and previews tonight’s Nets/Pistons matchup with Jameson Draper from Piston Powered. We’re going have a few new episodes per week, talking Nets basketball, previewing upcoming games, discussing potential personnel moves, and much more. You can subscribe through our Soundcloud or our Podomatic. Thanks for listening!