With the Minnesota Timberwolves on the second night of a back-to-back and without (*deep breath*) Ricky Rubio, Kevin Garnett, Nikola Pekovic, Gary Neal, Anthony Bennett, Shabazz Muhammed, and Robbie Hummel, the Brooklyn Nets found themselves in a favorable situation before the game even began. From the opening tip the Nets forced the ball inside, hit the offensive glass, and turned Timberwolves turnovers into good looks on the offensive end and led by double-digits over the course of the entire second half, winning 122-106 in Minnesota.

The starters went to work early and found success in (surprise!) going towards the basket (20 first-quarter paint points), but not so much from three (1/5). Brook Lopez was effective in limited shot attempts (7/8 on the night) and instead hit the offensive glass for six rebounds (eight total), while Joe Johnson handled most of the offense, with 11 points in the first quarter and 22 on the night. Jarrett Jack and Mason Plumlee first checked in late in the first and were a quick -6 after two and a half minutes of action, and the bench soon surrendered the lead in the second quarter.

Jack, Plumlee, and Alan Anderson were the only Nets with a negative point differential on the night, struggling against the remaining TWolves bench of Justin Hamilton and Chase Budinger, who combined for 33 points (on 24 shots). The starting front court of Joe Johnson, Thaddeus Young, and Brook Lopez remained a matchup problem for Minnesota, as they combined with Bojan Bogdanovic to key a 17-4 run to end the first half and establish that double-digit lead.

The starters went back to using their size and passing skills to get good looks around the rim in the third quarter. Joe Johnson again dropped an 11-point period and saved himself from having to play the fourth quarter, and Brook continued to back-tap offensive boards. Thaddeus Young scored six straight to close the quarter by hanging around the rim and finishing with his athleticism, and the lead stretched to 19 after three quarters.

The fourth quarter was a formality, at least after five-consecutive Bogdanovic points put the lead to a game-high 21, capped by his left-handed dunk on the fast break. Alan Anderson got a three-pointer in before the final buzzer and Jerome Jordan and Darius Morris saw two minutes of action in the closing minutes of the Nets’ 122-106 road win.

Brooklyn’s 122 points tied a season-high, with their overtime-loss to the Toronto Raptors January 30th, and their 78 points in the paint set a season-high for a team that (as Ryan Ruocco noted on the YES Network broadcast) leads the league in that category since early February.

Bojan Bogdanovic put together perhaps his most aggressive and effective game of the season against the Timberwolves, with 21 points in 27 minutes off of Lionel Hollins’s bench. He shot 10/15 from the field and 1/3 from three, and made five of his six attempts around the rim without generating a free-throw attempt. It was his first game with 15 or more field goal attempts since the triple-overtime loss to Milwaukee back before Thanksgiving, when he managed 16 shots in 47 minutes (and in the starting lineup). Bogdanovic’s output was focused and assertive, from his second possession on the court. To be fair to him, he had to wait the entire first quarter before Hollins subbed him in for Joe Johnson, but instead of settling for a catch-and-shoot long jumper off of a high screen, he kept going into the paint to throw up a half-hook. He scored on a step-back jumper on his next look, then took Chase Budinger all the way to the basket and finished with a left-handed layup after a broken screen-and-roll. In situations where he’s been tentative in the past, like when the spacing dies after a pick/roll or if the defense flashes a double, against Minnesota he instead kept his dribble alive and his head up.

And he kept firing. For a Nets second-unit that often relies on Jarrett Jack pull-up jumpers for offense, particularly after moving Thaddeus Young and Brook Lopez into the starting lineup a couple of weeks ago, a confident Bojan Bogdanovic gives the Nets another potential stretch option and source of scoring. His off-the-ball movement also allows the mobile and young Nets bigs to run some interesting sets for him.

In this “Elevator Doors” play, the two bigs (Young and Plumlee) set up around the free-throw line and act largely as screeners (unlike in HORNs). Bojan begins by showing a screen to free Alan Anderson on a cut along the baseline, as Jarrett Jack pounds the ball up top. 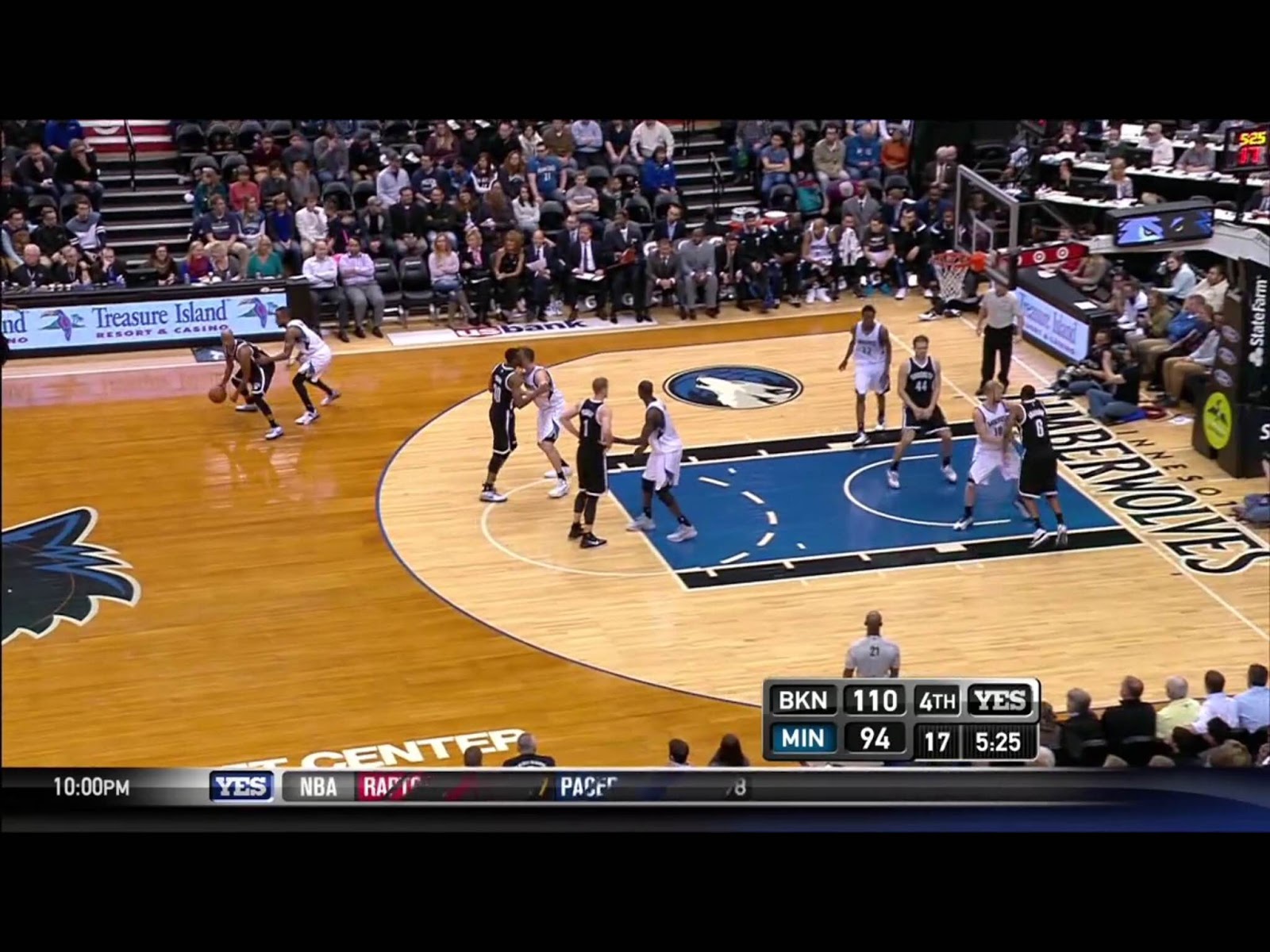 Instead Bojan fakes the screen about halfway through Anderson’s cut and darts up the middle of the lane and towards the three-point line. 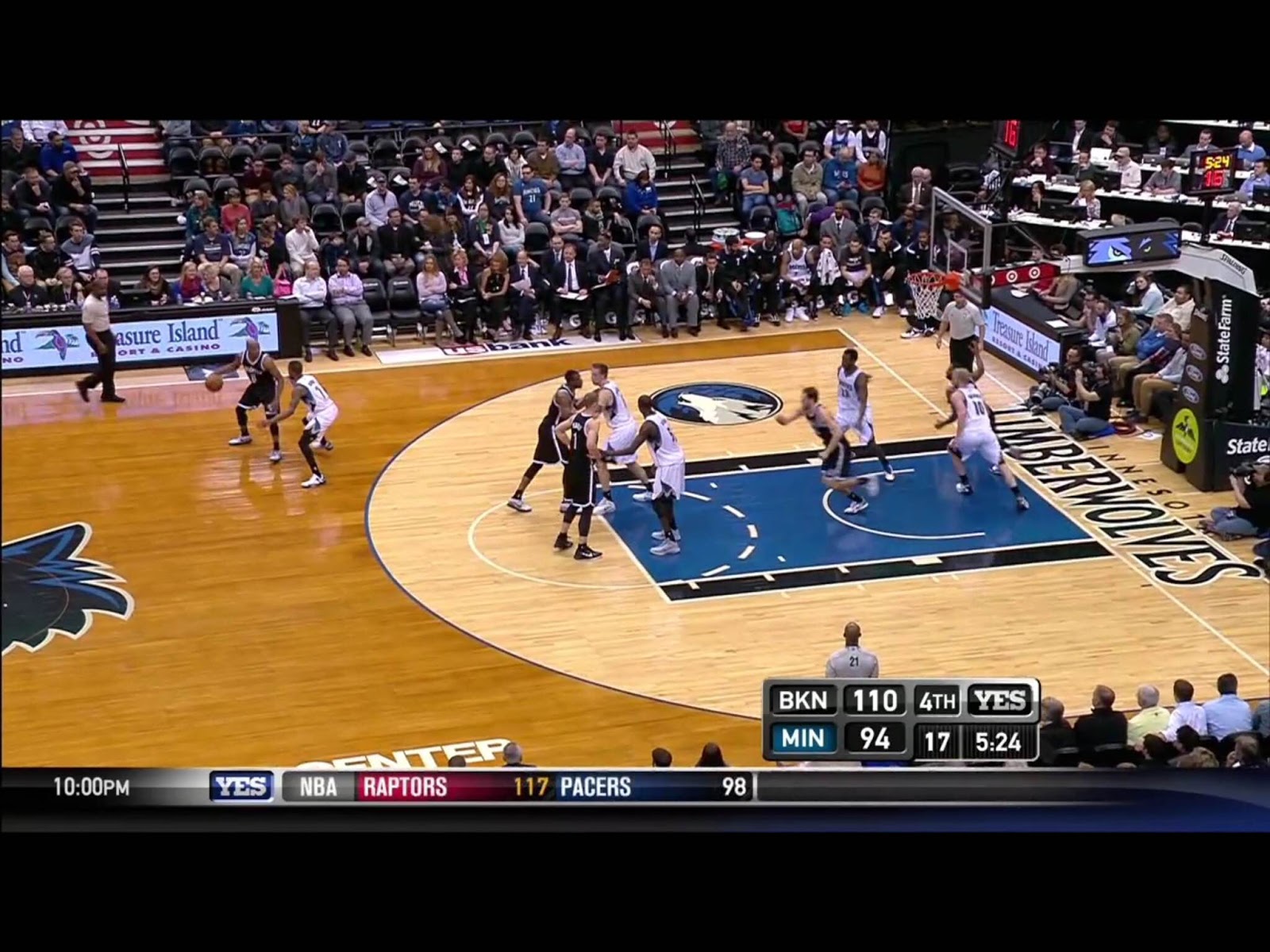 Plumlee and Young draw ever-so-slightly closer together until Bogdanovic makes it through, and then they close (like elevator doors) to pin the defender in the double screen. Andrew Wiggins is a step slow recovering on the cut and gets caught, and his big-men defenders stand around looking clueless instead of helping over the top. By the time Wiggins can break through, Bojan has already caught the pass from Jack, squared his shoulders to the basket, and is about to begin his jump shot. He’ll make the shot as his only long-range connection of the game, but it comes off a beautifully-executed play by all five Nets on the floor. With Bojan Bogdanovic moving on up in the world like elevators (or hopefully the rotation, at least), look for Coach Hollins to keep adding new wrinkles to his playbook to spark the Nets’ outside shooting. If his bench rotation stays as is, experimenting on offense with different looks is a much better and more appealing option than Jack’s pull-up jumpers or Alan Anderson post-ups.

It also helps when, in the next play, turnovers or long rebounds can lead to transition opportunities and easy baskets. When Andrew Wiggins is missing easy one-handed dunks and Bojan Bogdanovic is throwing down the left-hander on the break it may just be “one of those nights”, but Bojan consistently put himself into good positions all night by being aggressive and maintaining his high energy level. Get this man some confidence!