Alan Anderson only played the seventh-most minutes per game for Brooklyn in 2014-15, but he was generally effective in those minutes and found his nightly niche as a “3-and-D” swingman. Perhaps the most inconsistent aspect of his game has been his nicknames. That’s mostly been on us, the loyal viewers, but it’s bordering on ridiculous at this point: Double, A Squared, Double A Battery… We’re going to have to settle this before he either leaves the Nets or retires, one would think.

But back to Anderson’s basketball. Although he’s no more than a slightly above average player, Anderson’s steady hand was reassuring in a season of major ups and downs (mostly downs) for the Nets. Take a look at his three-point shooting, by month:

Outside of his rough January (a month in which Brooklyn as a team fell off a cliff) Anderson stroked it from deep at a decent rate year-round. He mostly thrived on catch-and-shoots and the corner three: 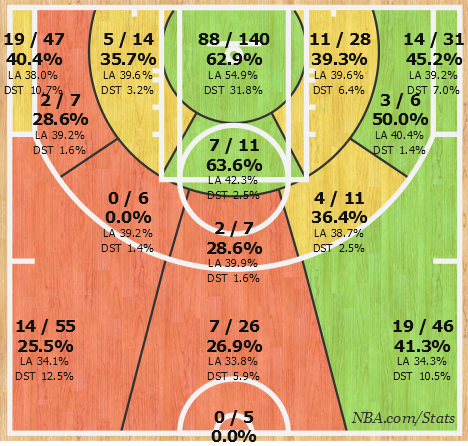 The three wasn’t his only offensive weapon. As made obvious by the shot chart, Anderson had a knack for getting to the rim. He put up .84 points per play in isolations, a modest number but one that may surprise folks. He has a little jab step in his repertoire that he uses to break into a strong drive straight to the cup, and he was willing to pass the rock when the offense around him was as well.

On the defensive end, it could be argued that Anderson was the Nets’ best perimeter defender, short of maybe Markel Brown. That sentence should tell you all you need to know about how poor Brooklyn’s defense was, but Anderson presence was definitely a plus. During the regular season, the Nets gave up 6.6 fewer points per 100 possessions with Anderson in the contest. He’s no home run defender, with very few steals and blocks, but he understands the system and has the athleticism to be an annoyance in one-on-one situations.

These are all reasons why some believed that Anderson should have held a permanent starting spot on the squad. Anderson did start 19 games, including a 15-game stretch spanning the month of February, and his stats actually took a bump. His true-shooting clip increased from 54.8% to 59.2%, though with the same usage rate.

Speaking of stat bumps, his Playoffs performance was… unexpected, to say the least. Anderson came off the bench to hit 10 of his 16 three-point attempts (62.5%) and do a solid job chasing Kyle Korver around the court against the No. 1 seed Hawks. It seemed every shot Anderson put up was going through the rim, and he was major in Brooklyn securing two wins in what looked like a hopeless series.

As for Anderson’s future with the Nets, it seems unclear. He has a player option to remain in Brooklyn for the 2015-16 season worth $1.3 million. There’s no telling which way he’s leaning, with the chance at securing bigger deal this summer or waiting until the cap explodes in the summer of 2016 to shoot for an even greater payout. Anderson’s definitely a player Brooklyn wants to try and keep, for no matter how rocky the path ahead is, Anderson is able to steady the ship in his limited role.