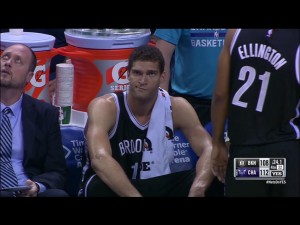 The Brooklyn Nets’ quest for their first winning streak of the season will continue, after falling to the Charlotte Hornets, 111-116, Wednesday at the Time Warner Cable Arena.

With both teams on the second nights of back-to-backs, the game alternated between effortless offense and sloppy execution, as each team scored at will in the painted area and took it easy on their respective defensive ends. Both squads shot over 48 percent from the field, but while Brooklyn held the edge in turnovers and paint points (each by a plus-six differential), the Hornets generated 14 additional free throw attempts and finished with a 33-15 advantage from the three-point line, in their five-point victory.

It was the Nets who came out firing initially, led by the encouraging jumper of veteran Joe Johnson. The seven-time All Star has struggled with his shot to begin the season, scoring 11 points per game on 32.8-percent shooting entering Wednesday, but converted on three of his first four attempts from deep in a 32-point quarter that saw Johnson submit 13 points.

By the start of the second quarter, the Hornets’ bench unit was in the midst of a 7-0 run that was triggered largely by the spacing and passing of the Spencer Hawes/Frank Kaminsky backcourt. Nets head coach Lionel Hollins countered with a Brook Lopez/Andrea Bargnani tandem for the opening six minutes of the quarter that scored well, but lacked the foot speed to chase their opponents along the perimeter. The substitutions of Rondae Hollis-Jefferson, Shane Larkin, and Thomas Robinson, meanwhile, sparked a 10-1 run over the last three minutes of the half that featured some of the swarming, trapping defense and fast-break offense that the young Nets have flashed so far this season (see below).

The third quarter belonged to the Nets’ Thaddeus Young, who was responsible for 15 points (on nine shots) on a variety of layups and high-percentage looks around the basket. Neither Cody Zeller nor Kaminsky apparently read the scouting reports on Young, as they each let him out-craft his way to the left side of the rim during a stretch in which he scored on six-of-seven shot attempts and provided the team’s only made field goals over a span of six minutes. He began the fourth quarter, though a wide-right three-point attempt on the team’s second possession would result in his sitting the bench for the next six minutes, and he would be replaced by Johnson in the seldom-used (for a reason) Larkin/Wayne Ellington/RHJ/Joey J/Bargnani lineup that lasted about another twenty seconds.

By the time Thaddeus re-entered the game at the 4:23-mark, the Nets were down by four points and still within reach. The lead swelled to eight before a 6-2 Brooklyn run brought the score again to a four-point deficit with a minute remaining, and two missed Kemba Walker free throws gave the Nets the ball following a Hollins timeout.

Hollins put the ball in Joe Johnson’s hands and into some Brook Lopez high-screen action, which resulted in a decent look at a fadeaway jump shot along the baseline. Johnson’s hesitation dribble kept Al Jefferson involved in the play and the Charlotte defense swarming on the shot, and allowed Thaddeus Young to sneak in on the weak side for a point-blank put-back opportunity that wouldn’t fall.

Next offensive set, still down four and following a timeout, and Hollins instead let Lopez initiate on the catch. The center spun into a contested floater that rolled off the back rim, the Hornets collected the rebound and were intentionally fouled, and Brook gave a great dejected look as he walked to the bench (cue Charlie Brown music).

As one final indignity, with the lead still frozen at four points, Lopez, in an attempt to help his point guard beat the one-man Hornets pressure, subsequently got called for the illegal screen and offensive foul with 18.9 seconds left on the clock. Poor Brook could only express incredulity at that point, and at the unfortunate timing of his first turnover of the game. Marvin Williams made his next two free throws, followed by two Kemba Walker free throws, and a garbage-time three-pointer by Jarrett Jack finalized the score at 111-116.

Any conversation as to the positives from the Brooklyn Nets’ performance in their loss to the Charlotte Hornets has to begin with the play of Thaddeus Young. Finishing with 27 points on 11/17 from the field, including 0/1 from three and 5/6 at the charity stripe, with eight rebounds, an assist (to no turnovers), and a steal in 33 minutes, Young’s activity and agility at the power forward position allowed him to beat his bigger defenders to the rim all night, but especially in a huge third quarter where he dropped 15 points with two boards.

With only four of his shot attempts coming from beyond the free throw line (see to the right), Young continually attacked his defender off the dribble by slashing to the basket, but also by setting up his left-handed jump hook with his quick spin moves on the block. On a night when his face-up game wasn’t particularly effective, he still led all players in scoring by dominating at the rim and drawing five free throws, just 24 hours removed from making the game-winning play against the Atlanta Hawks (and taking a nice fall in the process). Thaddeus Young’s aggressive mentality and newfound interest in scoring the basketball will be worth monitoring entering a weekend home-and-home with the Boston Celtics.

Also deserving attention is the rather amazing and sneaky statline of Jarrett Jack against the Charlotte Hornets, with a 16-point, 8-rebound, 9-assist (to three turnovers), 2-block performance in 33 minutes. Jack made 6/12 shots, on 2/4 from three and 2/2 from the FT line, and finished with a (rare) positive point differential of plus-four.

While he’s certainly deserved some of the criticism for his shoot-first instincts as the Nets’ starting point guard this season (also deserving: his 40.7-percent field goal percentage in 11 games), he’s boosted his assist-per-game average up to 7.5, which is tied for fourth in the league (NO, SERIOUSLY!). He still takes bad pull-up jumpers in transition and dribbles with his head down far too often, among other flaws, but Jarrett Jack has submitted at least his third-straight strong performance as the starting point guard, despite the Nets’ 1-2 record in that span.

On the other end of the spectrum is the continuing disappearance of what we had all hoped was an emerging Bojan Bogdanovic this season. Against the Charlotte Hornets, “Bogie” was passive in his 18 minutes, taking just a single shot and making both of his free throw attempts for two points, along with four rebounds, an assist, and a steal. Hollins certainly noticed his ineffectiveness, reaching deep into his bench to dust off Markel Brown for five minutes in the final quarter. Considering his previous two games before Wednesday’s tip-off in Charlotte consisted of a two-point performance in Golden State (on 1/6 shooting and without Klay Thompson) and an 0-fer on four shots at home Tuesday against Atlanta, Bojan Bogdanovic’s ongoing bouts of inconsistency and passivity are starting to become alarming for the Brooklyn Nets.

For the team, however, another close loss is frustrating, but after the Nets’ atrocious 0-7 start to the season that included a minus-87 point differential, their minus-four total over their next five games and consistent output from their veterans has to provide some shreds of optimism, as the team continues their four-out-of-five road slate heading into the holiday weekend.

The Brooklyn Nets fall to 2-10 after their 111-116 loss in Charlotte, and will play next on Friday at 7:30 pm at the TD Banknorth Garden against the Boston Celtics.