Trending in Brooklyn: The “Race” for the Eight Seed

Two weeks ago the Brooklyn Nets looked down and out of the hunt for the eighth seed, but after a 5-2 stretch and some slip ups by other teams in the race the Nets are right back in it. Here’s what’s been trending in Brooklyn:

This playoff “race” is sad, and bordering on embarrassing. Yet here we are, with the Nets sitting at 30-40 and somehow only a half game out of the eighth seed in the Eastern Conference Playoffs because… well, it’s the Eastern Conference Playoffs. This doesn’t even really have the feel of a race for a playoff spot so much as it feels like a few bad soccer teams competing to avoid relegation. Whoever comes out of this is almost assuredly going to get brutally pounded into submission by the Atlanta Hawks, but no matter what happens the Nets aren’t going to be getting any ping pong balls in the draft lottery, so why not? Let’s get the eight seed. Sure.

There’s only one problem with that: the schedule. Brooklyn’s final 12 games includes a contest each against the Cavaliers, Raptors, Trail Blazers, Wizards, Bulls, and then two games, home and away, to the Hawks. If there’s any consolation to this brutal schedule it’s that there are only two back-to-back sets, and on one of them the back-end is a crosstown showdown against the 14-win New York Knicks . If there’s anything akin to a must-win game it’s on March 31st when the Indiana Pacers come to Barclays Center. The Pacers currently hold a half game lead over the Nets for the eighth seed, and if Brooklyn wants to sneak into the playoffs a loss there would be a serious blow.

Brook Lopez Have it All

There’s only one thing on this Earth hotter than my takes in the previous section, and his name is Brook Lopez. In his last 10 games Lopez is putting up 20.8 points, 9.2 rebounds and 2.4 blocks in 32 minutes per contest, all while shooting 59 percent from the field and limiting his turnovers to 1.2 per contest.

In the recent stretch he’s posted three games of 30 points or more including a monster 34-point, 18-rebound performance in the Nets’ two-point triple overtime win over Milwaukee. Prior to that contest Lopez had notched just one 30-point game all season.

Lopez has been on fire, and a large part of his scoring output is due to how he’s shot the ball from the mid-range. He’s shooting 58 percent from the mid-range overall, and as been particularly hot from just above the free throw line, where he’s drilling almost 64 percent of his attempts.

Lopez has had an up-and-down season, being pulled from and then re-joining the starting lineup on multiple occasions, but as the Nets fight for a playoff spot he appears to be playing his best ball of the season.

Every single team in the NBA has better stats in wins than in losses. This isn’t breaking news, but in Brooklyn’s case the results are slightly jarring. In wins the Nets score an average of 105 points and give up 95.1 — averaging almost a double-digit victory when they win. But in losses the team is outscored 104.9 to 91.5 on average.

The defense certainly drops off, but perhaps even more concerning is how the offensive output drops by nearly 15 points. Shooting is a key part in this trend, with the Nets knocking down 38 percent of their long-range looks in wins and an ice cold 28 percent in losses. 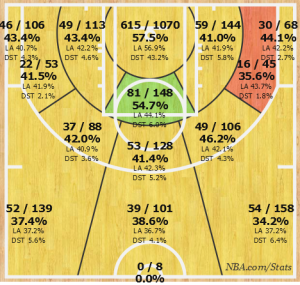 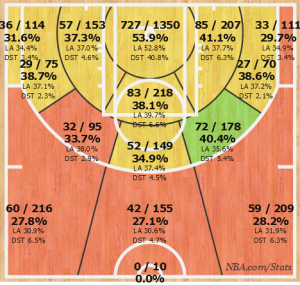 The Nets aren’t a terrific shooting team, but drilling threes at even an average rate is key to this team coming away with wins.