The Brooklyn Nets have had a solid two weeks, compiling a 4-2 record featuring an impressive overtime win against the San Antonio Spurs. Here’s a few trends that have begun to develop that you should be on the lookout for:

The Nets Have a Brook Lopez Problem

Here is a list of all players so far in the 2014-15 NBA season that are recording a usage rate of over 25 percent, are playing at least 25 minutes per game, and dishing out less than one assist per contest:

The main issue with Lopez is that he’s become a black hole offensively. Once the ball enters his hands, it’s probably not leaving them except via shot attempt.

Here’s a few plays from recent games where Brook took a bad shot instead of kicking out to his teammates. It should be noted that he actually made a couple of these shots, but that’s not the point. As always, you can click the images to enlarge them.

Brook grabs an offensive rebound and has Joe Johnson WIDE open in the corner. Instead he takes the difficult shot while surrounded by three Spurs.

Here’s another play from the Spurs game broken down into three frames. 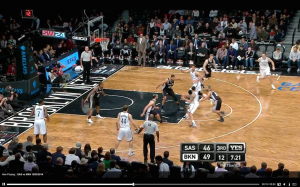 This play starts with a simple Deron Williams/Brook Lopez pick-and-roll. Lopez is freed up and calls for the pass. Williams throws the pass too far in front of Lopez, and he catches it behind the basket. There’s still 10 seconds on the shot clock and Lopez is in a really bad spot, but he goes up with the shot anyway and is easily blocked from behind by Tim Duncan.

And here’s one last play from the Nets’ win over the Knicks: Brooklyn ranks 21st in the league in offensive rating, and while Lopez isn’t the only cause for this, a little more ball movement from the big man would really help out.

Send it in Jerome!

Here’s something to keep an eye on. Over the last couple of weeks or so Lionel Hollins has been giving a healthy portion of Mason Plumlee’s minutes at the backup center position to 28-year-old journeyman Jerome Jordan. Plumlee has played less than 10 minutes in five of his last seven games, while Jordan (who receiver multiple DNP-CDs earlier in the year) has seen his minutes increase.

Here’s a comparison of how the two players have fared per 36 minutes this season.

The main thing to look at here is the difference in field goal percentage. A season ago Plumlee shot an outstanding 65.9 percent from the floor. It might have been expected that that number would come down this year, but not like this. Unless Plumlee can improve his finishing then we might see a lot more of Jerome Jordan from here on out.

Jarrett Jack is actually having one of the most efficient seasons of his career, hitting on 47.2 percent of his field goal attempts, but he’s been unable to buy a bucket from beyond the arc. Jack is shooting an atrocious 11 percent from three on the season, making only two of his 18 attempts.

As bad as that sounds, it’s not necessarily a bad thing, as he’s bound to turn it around here pretty quickly. Jack is a career 35.3 percent shooter from downtown, and in his 10-year career he’s never shot worse than 26.3 percent (his rookie year), and that percentage has been over 30 in every other season.

What’s more concerning than the low percentage is that he’s shooting fewer threes per 36 minutes than he ever has before in his career, and when looking at the SportVu data, the threes he has been taking have been difficult. 10 of his 18 attempts have come with either four seconds or less on the shot clock or with the shot clock turned off, and 12 threes have been with “tight” defense (a defender within four feet).

We have a 10-year sample size that says Jack is a good long-range shooter. If he starts taking more open looks from deep his percentage will inevitably rise.