Time for some answers 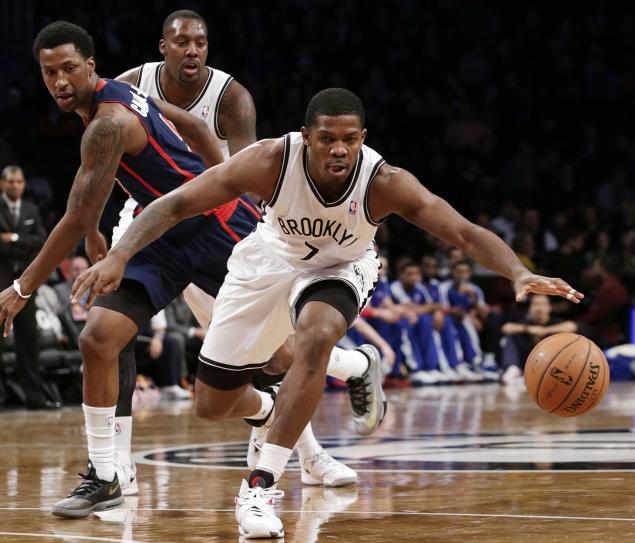 It’s not even Thanksgiving and the Brooklyn Nets season is on the brink of total failure. Another lackluster effort. Another disastrous third quarter. Another loss. Despite Coach Jason Kidd mixing up his starting lineup and rotation the results were the same. Worse yet, the refrain from the players post-game is becoming redundant.

Andray Blatche summarized the disappointment. “I don’t know. It’s very frustrating and very, very embarrassing. It’s like, I don’t know.” He continued, “We’ve got to play with more pride. I don’t know. There’s no excuses, nothing. We’re all just playing bad, and we’ve got to do something.”

For those of you counting at home that’s three “I don’t know’s,” and a whole lot of desperation and confusion. This team simply cannot figure it out. The Nets appeared to get things going in the second quarter Sunday afternoon, using a late 13-2 spurt to jump out to a 51-41 lead just before the half. Joe Johnson ripped off 13 points in the quarter on his way to a game-high 34, and the Pistons were held to only one basket from the 4:35 mark on… until there was less than a second on the clock. A late Blatche foul on Greg Monroe turned into an old-fashioned three-point play and the lead was slashed to seven. It was only three points, but these are the kinds of mistakes that have cost the Nets all season.

Anyways, maybe a ten point lead wouldn’t have held up. In what’s becoming one of the strangest statistical trends of the season, the Nets were again slaughtered in the third quarter. This time the margin reached 19 points. After holding the Pistons to 43 points in the entire first half, the Nets surrendered 34 in the third quarter alone. Brandon Jennings was the main beneficiary of the collapse, netting ten points by repeatedly pushing the ball into the teeth of the Nets defense.

Meanwhile, the Nets put up putrid 15 points in the third frame. Coach Kidd was so disgusted with the performance of his starters to begin the second half that he unrolled a lineup of Tyshawn Taylor, Alan Anderson, Tornike Shengelia, Mirza Teletovic, and Mason Plumlee to begin the fourth. That group has now logged 18 total minutes on the court together this season and has a surprising +4 rating.

When asked about the bold move Kidd said, “They deserved to play. I should have let them play the whole quarter.” He added, “Those guys are playing hard and they’re helping one another on the offensive end and the defensive end.”

While what Coach Kidd said was in fact, true, it was also a condemnation on his starting lineup. Other than Joe Johnson flame-throwing a career-high eight three-pointers, the Nets starters were pitiful. Kevin Garnett came out strong again, hitting his first two shots, before missing his next nine. Paul Pierce had another rough outing, hitting only five of his 13 attempts and turning the ball over four times. Shaun Livingston was largely ineffective in his 35 minutes, and Andray Blatche, inserted as a starter for Reggie Evans, didn’t fare much better.

The Pistons are far from world-beaters, entering the game at 4-8 with spacing issues on offense, and a sieve for a defense. Nonetheless, they bullied the Nets in the paint and on the glass all game long. Greg Monroe touched up the Nets for 18 points and 11 rebounds, while Andre Drummond chipped in nine points and ten boards. The final rebounding tally was 44-35 in favor of the Pistons, including 13 on the offensive side. But Monroe and Drummond weren’t the only Pistons dominating the painted area. As a team, the Pistons Pacquiao’d their way to a 56-22 advantage in points in the paint.

Mirza Teletovic tried to keep the Nets close early in the fourth, but then Rodney Stuckey took over. Stuckey leads all Eastern Conference players in points off the bench and Sunday was maybe his finest showcase. He slashed his way to 17 fourth quarter points and 27 for the game. Stuckey finished with a game-high +15 rating in only 31 minutes.

In the end, it was more of the same for the Brooklyn Nets. The same questions that existed after the 2-5 start remain with the team at 3-10. The most discouraging part may be that neither the coaching staff nor the players seem to have any answers.

Surely, Kevin Garnett would be able to put his finger on what’s keeping the Nets from breaking through these last few games. He’s seen it all in his 19 year career. He’s been there and done that. He’s walked the walk and the talked the talk.

“Teams are coming out with more energy,” Garnett replied when asked about the recurring third quarter issues. “They’re coming out scoring, aggressive. We’re not ready for that for some reason, and I don’t know why.”

If Garnett is clueless as to the source of the problems then what hope do the rest of the Nets have? Blatche may have said it best, when he told the media, “We’re just playing bad… and we’ve got to do something.”