Using the Summer League to peek into J-Kidd’s offense 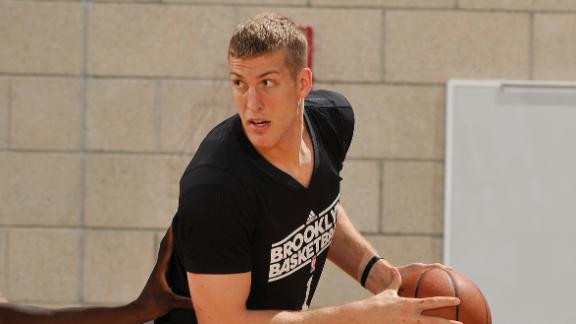 This is the part where I should probably start off by saying something eclectic about Summer League basketball, but let’s be honest: It doesn’t matter.

I mean, sure. A few things here and there might result in something meaningful. But, for the most part, it’s more like that scene from This Is the End when everyone gathers around Seth Rogen to pull matches from his hand. In reality, we’re really trying to grasp the one ever-loving burnt match.

In fact, this actual commentary from the third quarter of the Nets/Pistons game pretty much sums it up:

Vince Cellini: “Now, has [Kidd] tipped his hand at all in that first half in terms of what offensive system he may be running with Lawrence Frank this upcoming season?”

Kendall Gill: “Nah, I don’t think he’s tipped his hand at all.”

(The NBA Summer League, everyone!

Alas, with no actual history of a J-Kidd-taught offense, all we can do is take the small sample size we have on-hand (and I mean small) and speculate. Whether that sample size is actually significant is an entirely different discussion. Let’s get to it.

(Quick note: I kept tally of the defenses used for the first couple of series. After that, I quickly realized that NO ONE PLAYS DEFENSE IN THE SUMMER LEAGUE. Unless you’re a big man that can make a ferocious block, defense is considered petty in Orlando. By the end of the first game, I legitimately thought the wide-open backdoor cut was a play. And actually, if you’re good with Photoshop, I’d be more than happy to slap that moniker on the back of my car. “The NBA Summer League: Where Uncontested Cuts Happen!”

1. According to four Summer League games, the offense will be center-rific. And by that, I mean 99.5% of every pick, cut, pass, and jumper relies heavily on what the center does. In fact, I’ll go as far to say this: If the center wasn’t in the play, than either (a) the wing caught the ball and fired it up immediately, or (b) the point guard drove the middle of the lane.

Now, I’m not hinting you should go out and be the guy that overspends for Brook Lopez in your auction draft. After all, maybe the staff just wanted to get Plumlee the most touches. However, the center position was all over the place, which brings me to my next point.

2. Thankfully, a few plays were run enough times to deem as constant. For instance, take a look at the series of pictures below.

This particular pick-and-roll was used quite a bit. Basically, the center (like I said, center-ific) seals his man in order to receive the ball near the free throw line. Once it’s in his hands, the point guard runs to the corner and sets a screen for the wing, who rolls around and (hopefully) finds himself open for a 17-footer. The few times this play failed, it resulted in the center turning around and going one-on-one with his defender. Which reminds me…

4. The most intriguing play of the Summer League so far was botched during the first attempt and never repeated. At one point, Plumlee ran to the top of the key to set a screen, except this time, he immediately slipped and ran down to the corner to set a second screen for the wing. I defined it as botched because he literally wasn’t looking for the ball at any point before that second screen. Even a quick turn of the neck would’ve teased his defender. Instead, he simply went through the motions like an actor who hasn’t quite memorized his lines yet.

The good news is that none of it might matter.