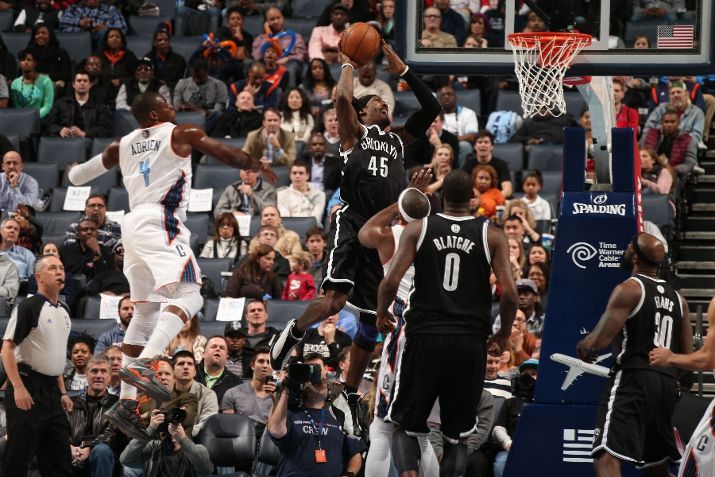 On Wednesday afternoon, Sports Illustrated’s Rob Mahoney posted a list of what he deemed the NBA’s “most problematic contracts,” starting things off with a pair of Brooklyn Nets: Joe Johnson and Gerald Wallace. Though his crash-heavy style of play could’ve only portended a decline as the years went on after coming to the Nets, “Wallace bucked that preliminary projection by flailing almost immediately,” Mahoney wrote, also adding, “There’s just not much room for him to help as a range-less wing alongside two interior big men, though both Avery Johnson and now-interim coach P.J. Carlesimo have insisted on playing him in such a capacity.”

It was perfectly coincidental, then, that last night’s game against the Charlotte Bobcats ended up as a sort of referendum on Wallace’s value to the team. Save a Twitter-stopping and1 dunk on the break, he was unlucky and unsuccessful on offense, missing five shots at the rim to go 1-for-7 overall. But he also ended up with a season-high five blocks, three of which came in transition, two against Gerald Henderson. (“I can read your mind,” he must’ve thought at the eager Bobcat. “Don’t even try.”)

The Nets looked a positive bummer coming out of the gate, allowing the league-worst Bobcats carve them up inside the paint and race out to a 10-point deficit by halftime. Call it bad luck, but they missed a number of open shots and attempts at the rim during an ugly second quarter while allowing Ben Gordon to drop twelve points in five minutes—the last of which came on a technical called against assistant coach Mario Elie, who was arguing that Gordon had intentionally tripped Wallace following a rebound. (The video evidence was inconclusive, though Gordon certainly didn’t get out of the way.)

Perhaps helped by a shortened locker room speech, things immediately turned around after the return. As soon as Wallace stopped shooting—five of those six misses happened in the first half—the Nets found a comfortable offensive equilibrium, with a balanced scoring attack (at one point, they hit seven shots in a row) split between Brook Lopez, Joe Johnson and Deron Williams keying a 28-9 third quarter. The Bobcats tried to nibble away at the deficit, but never got closer than 8 points in the final period before the Nets paced themselves back to blowout territory.

Which takes us back to Wallace, who’s due to make a cap-unfriendly $30 million over the next three years. But he’s still a credible defensive presence, and the burden is on the team to use him more effectively on offense. (According to Synergy, he takes about a third of his shots as a spot-up shooter and only scores about a third of the time, too.) A contract is only truly problematic if it can’t offer any value on the court—and thankfully, he’s nowhere near that level.

° Kris Humphries may be the most expensive benchwarmer in the league but there’s purpose in giving his minutes to Mirza Teletovic, who’s ostensibly a three-point shooter even though he went just 1-of-4 beyond beyond the arc last night. But defenses do take him seriously, and rushed to close out whenever he got free—enabling him to whip the extra pass to the open man along the perimeter, leading to two makes (one from the corner). Admittedly, Teletovic was mostly free due to Charlotte’s defensive breakdowns. But there’s no world in which Humphries provided that threat, though opponents might eventually start risking the open shot if Teletovic’s percentage doesn’t go up.

° Is there a more seemingly analytic averse tactic than when an open three-point shooter gets a defender to fly through the air while attempting to close out, then steps inside the line for a long two? (Bonus points if it’s a corner three.) Deron Williams did this toward the end of the second quarter, and ended up missing a 20-foot shot. Of course, sometimes the extra dribble is necessary to get back in a shooting rhythm—in which case, some intrepid Sloan Conference-presenter-to-be might want to take a look at the players who are best at recovering after watching their defender sail by.

° Not that a 20-foot set shot with time on the clock is necessarily what you want Brook Lopez taking—get inside!, you want to yell—but hey, at least he made both of his attempts.

° We’ll have to wait until at least Friday to see whether the Blatche-Lopez connection will lead to anything: Blatche had three turnovers in the first five minutes of the second quarter, and was sent back to the bench after committing a foul. He and Lopez didn’t play together in the fourth quarter, either.

° Couldn’t quite tell whether the clampdown in the third quarter was due to the Nets turning it on, or the Bobcats being the Bobcats. Hard to quibble, though.

Granted, Deron Williams won’t always have a flat-footed Josh McRoberts allowing him to look like “Deron Williams,” nor will Brook Lopez always be allowed to float around unattended in the paint, idling until someone gets him the ball. But it’s a nice reminder to take what the defense gives you, especially when it’s the worst in the league.